How to get your project off on the right footing 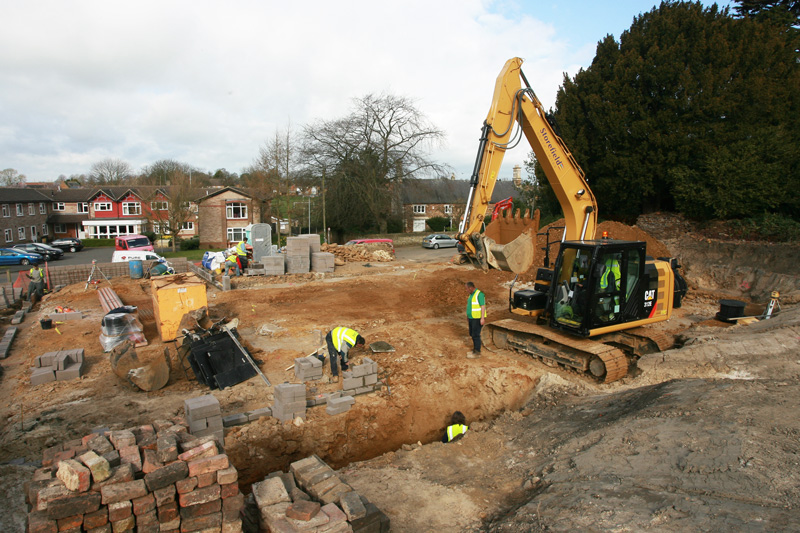 Ground conditions can have a dramatic impact on your budget so it pays to assess them before buying your plot. Soil type, the nature of the ground, proximity of neigbouring buildings, presence of large trees, the gradient and drainage are all factors to consider as they will affect your foundation options and ultimately your costs. Is there evidence of any previous development, or signs of infill? Clay soil, for example, is prone to shrinking and expansion (called heave) depending on the moisture content and often warrants deeper foundations or specialist solutions. Shallow concrete foundations, such as strip footings, rafts and pad foundations, can be used where the ground conditions are relatively stable, but where the ground is more unstable engineered solutions such as piling may be required. For sloping sites retaining walls may be necessary, and the trenches may need to be ‘stepped.’ 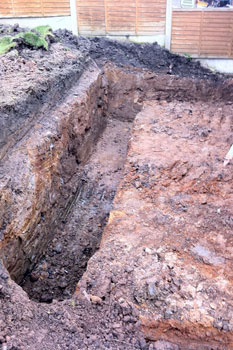 Your local Building Control may already have general information about soil types in particular areas, but for a more accurate assessment it will pay to commission a structural engineer to undertake a site inspection.

Part A, the section of the Building Regulations relating to foundations, lists common soils and subsoils. There is a chart showing how to identify these conditions.

Trial holes can be dug to determine the soil’s composition. These findings will help decide the type and depth of foundations required. As engineers carry professional indemnity they may err on the side of caution and recommend expensive engineered solutions, such as piling, which can almost double the costs. The type and size of foundations will also be determined by the load placed on them and should include the weight of the roof down through load-bearing walls which sit on the foundations. Calculations for such loadings, which are influenced by the ground conditions, should be left to a specialist.

In all cases the final decision about width and depth of foundations remains with Building Control.

Build according to the plans

If this sounds like common sense, think again. It has been known for houses to be built in a different position or to different dimensions to those approved by the planners. This can be a very expensive mistake and can even result in a demoliton order. So the setting-out stage is vitally important. 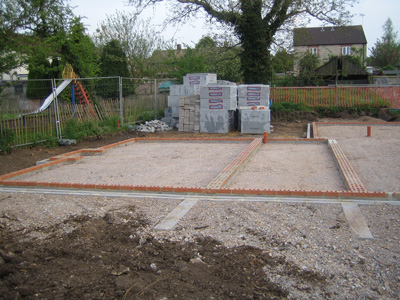 Once you have chosen the type of foundations the site will require clearing, levelling and setting out. Topsoil should be removed in the area of the footprint of the house and can be saved and re-used for the garden at a later date. This may be a simple DIY job or require JCBs and a lorry to remove the spoil. Setting out requires pegs to be driven into the corners with chalk lines then sprayed on the ground between them. Wall positions can be marked with pegs and string lines once the foundations have been concreted. Modern building methods, and especially timber-framed homes, demand a high degree of accuracy when it comes to the foundations and floor slab, and delays may occur if foundations are inspected and found to be significantly out of kilter.

Building contractors will either use their own team of groundworkers or subcontract this stage of the build to another company. The groundworker is usually the first trade needed on site and will then be responsible for any or all of the following:

This stage of the build can take weeks or even months to complete, depending on the complexity of the work, site access and the weather.

Soakaways need to be calculated so that they can cope with the run-off of rainwater from the roof. This can be calculated with a formula based on the roof size and annual rainfall.

A ground percolation test should be completed before undertaking any excavation.

The test will establish how well the ground absorbs excess rainwater and this will help determine the depth and width of your soakaway. The soakaway needs to be lower than the area being drained and at least five metres away from any building so that it doesn’t erode the foundations. All soakaways should comply with Building Regulations.

Strip foundations are usually the most economic option when ground conditions are good, and are created by excavating a trench, the bottom of which is covered with at least 150mm (and usually 300mm) of concrete to support load-bearing walls.

The Building Regulations for foundations give a clear list of rules under which strip foundations are suitable. Once ground conditions have been established loadings are calculated and the foundation width and depth of concrete decided, with standard trenches going down at least one metre with a width of 600mm. The usual route is to build up from the concrete strip in blockwork to ground level. Reinforcement may be required and the trench sides might need to be lined with a compressible material or a membrane. 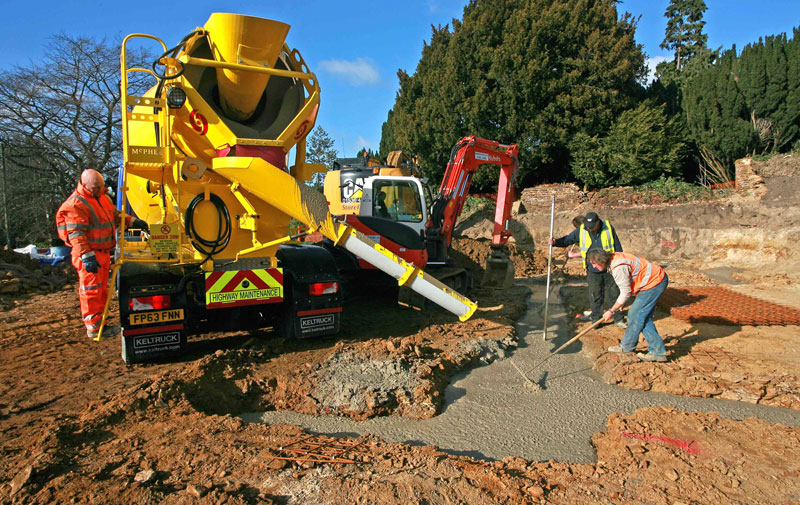 Trenchfill is a labour-saving alternative, often favoured by selfbuilders, which involves filling the trenches with ready-mix concrete to just below ground level.

Steel reinforcement may be added where required, such as in areas close to trees. Trenchfill is more costly in terms of the additional concrete required, but savings will be made by avoiding the labour and materials required for below-ground masonry building. Both methods are best completed in dry weather to avoid the trenches flooding. Once the trenches have been inspected and passed by the Building Control officer ready-mixed concrete needs to be poured as quickly as possible – usually on the same day as the inspection.

Pad foundations are used when isolated loads such as pillars need to be supported – spreading the load to the ground below. In simple cases the pad may be constructed from mass concrete, but generally some reinforcement will be required, such as reinforcing bars. The load is concentrated in relatively small areas of the pad, with large expanses being either non-load bearing or having lightweight loadings.

A concrete raft, strengthened by steel, covers at least the same area as the base of the building and is designed to transmit the whole load of the building from the raft to the ground. 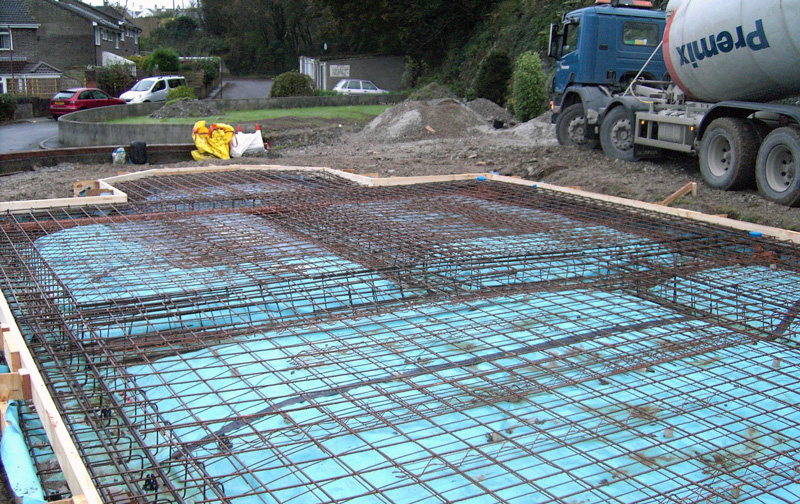 Rafts are chosen when the soil is soft or easily compressed, such as clay, and should be reinforced to resist ground movement.

The concrete is cast on the surface of the ground and may be used where strip, pad or pile foundations would not provide a stable foundation without excessive excavation. 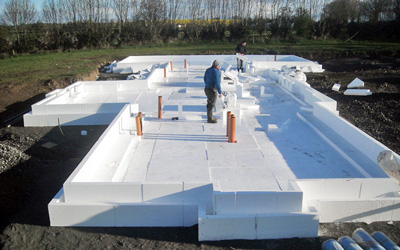 Similar to a raft foundation, these pre-insulated systems are relatively quick to install and provide an additional layer of insulation to improve thermal performance. The system is usually cast in-situ in a few days and is made up of a series of expanded polystyrene forms filled with reinforced concrete. Shown above is a Passive Slab system by Viking House (viking-house.ie). 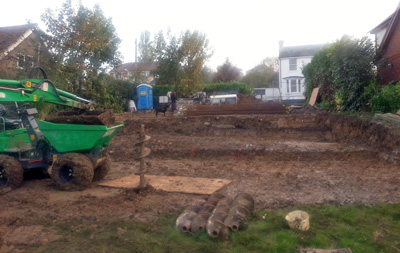 Piled foundations are popular with selfbuilders because the outlay is so predictable. The system typically consists of stilts or columns which are driven into the ground to rest on a solid, load-bearing soil stratum. The piles support a concrete ring-beam on which the house is built. Piled foundations are ideal for areas which are prone to flooding, and for sloping sites and poor ground conditions. Sheet piling is another option, which involves driving steel sheet piles into the ground. These sheets can be interlocked to form a continuous wall and are ideal for smaller sites or plots with neighbouring buildings in close proximity. Sheet piles are generally installed using specialist equipment, and are specified to support the vertical faces of large excavations, or where the prevention of water ingress is required.