Most selfbuilders struggle to keep within their budget, with some even doubling the figure they first thought of, so how do you raise the money in the first place and then avoid over-spending?

We’ve all read inspiring articles in which homeowners wax lyrical about how much money they’ve saved by selfbuilding. But are these stories the whole truth or merely an edited version of it? What is actually included in the final build cost and which items are omitted or conveniently forgotten? 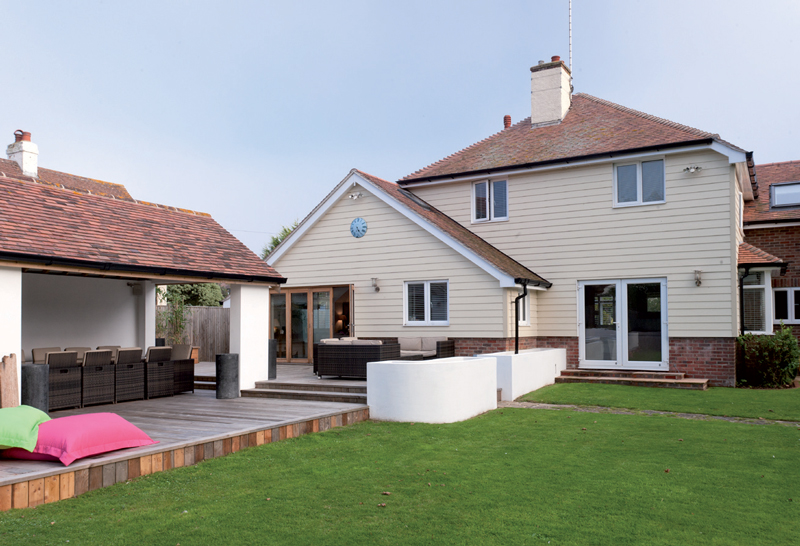 Most builds cost more than originally anticipated, with few - if any - coming in under budget.

This does not mean that selfbuilders lose money: almost every house we feature in SelfBuild & Design has been valued at more than it cost to build – although this should not be taken for granted. The point is that you need to be aware of the common pitfalls and try to avoid them, as well as setting aside a really healthy sum for unforeseen expenses. It will almost certainly be used.

The first step is to work out your financial capabilities, which will usually be a combination of capital and borrowing ability. Initial talks with possible lenders will establish how much you will be able to borrow, and these figures will influence the rest of your decision-making, so be honest with yourself and others.

Selling your current home and moving into temporary accommodation will release equity before starting a self build. Be aware that, if your current lender doesn’t offer a self-build mortgage scheme, you may be liable to pay a penalty in the event of early redemption.

BuildStore is the UK’s leading expert in self-build finance, and has worked with well-known banks and building societies to create a range of sel-build mortgages. Their Accelerator mortgage scheme enables borrowing of up to 90% of land and build costs, with a relatively small deposit.

The scheme is supported by a panel of lenders and releases stage payments in advance, enabling you to continue living in your current home. It also lends money on land that only has outline planning permission, whereas some lenders require detailed planning permission.

If you do have savings and are able to pay a deposit of between 15 and 25% of the land cost, as well as funding the early stages of the build, then it may be preferable to have an arrears stage payment mortgage, where funds are released in arrears of work being completed once a valuer has visited the site. 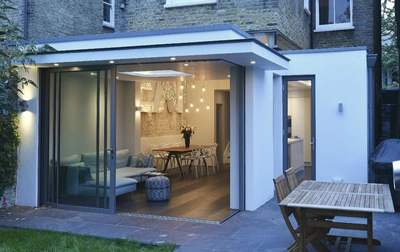 For renovation and extension projects most lenders will only offer funding on properties which are already habitable, with a working bathroom and kitchen. Extending an existing mortgage to pay for an extension or for renovation work is one of the most popular ways to raise funds.

Taking out a home improvement loan or personal loan is another option, and your finance requirements will differ depending on whether you are improving your current home or buying a house to improve.

The biggest difference between self-build mortgages and standard residential mortgages is that funds are usually released in stages for a self build rather than as a single lump sum. This reduces the lender’s risk and ensures that the money is spent as planned so you don’t run out part-way through the project.

Each case will be examined on its own merits, so take the time to put together your facts and figures before the appointment - including proof of salary and at least outline planning permission. Make sure you also have your own list of questions, as each mortgage varies considerably.

Check whether or not they will lend money towards the purchase of the plot and what the LTV (loan to value) ratio is, as well as when each stage payment would be made. If you are purchasing a timber frame make sure that you will be able to pay for it when required, confirm that the long-term mortgage is suited to your needs and what the rate of interest will be.

Sticking to a budget 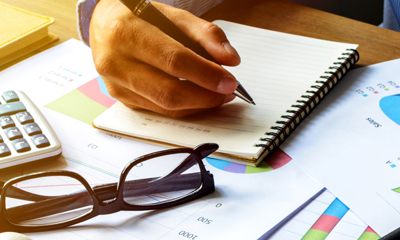 So now you know how much you can afford to spend it’s time to set a realistic budget for the build - one of the most difficult tasks a selfbuilder faces. The important thing is not to generalise.

Although ‘average’ build costs are often bandied about there is really no such thing.

Every plot and build comes with its own unique set of problems; builders’ rates vary from region to region, and the cost of materials can fluctuate hugely. Use ‘typical’ build costs per square metre as a very rough guide only.

Do your homework to ascertain exactly what you can get for your money, and be prepared to really shop around - not necessarily for the cheapest, but to secure the best deal for you. Get at least three quotes for all major purchases, including hiring contractors, and make sure that you compare like with like. Never pay for anything upfront.

Once you have settled on a design, try not to make significant alterations to it during the build.

A 10% contingency fund is often quoted for unforeseen overspends. It isn’t enough. Be prepared to spend as much as 15 to 20% more than you originally planned – and factor it into the budget.

If you have the time you can save money by shopping around for materials yourself and employing subcontractors on a labour-only basis, ensuring you get the best value for money. If possible, negotiate fixed prices for each job rather than paying a daily rate. Foundations, in particular, often incur an overspend, but a fixed rate should eliminate the risk of seriously blowing your budget in the first few weeks.

Every project and selfbuilder will be different, but there are some aspects of a build which seem to catch many people unaware. So what are the main budget-busters?

• Service connection charges are a popular one – particularly if you are building on an isolated rural plot.

• Over-specifying the finishes is another – so avoid including anything which won’t add value to your home. Kitchens and sanitaryware may be upgraded later, bricks and roof tiles may not. So put your money into the fabric of the house and don’t get carried away specifying luxury items during the course of your build.

If funds are running low, try making a list of features you want to include and place them in order of importance. 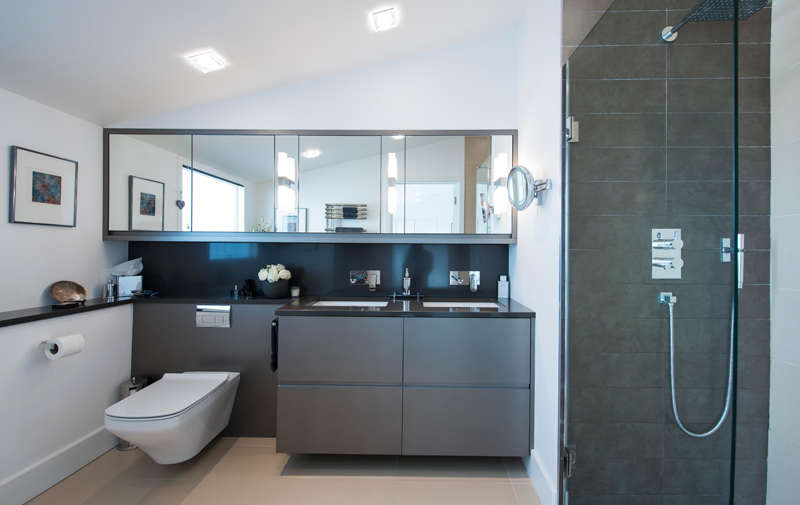 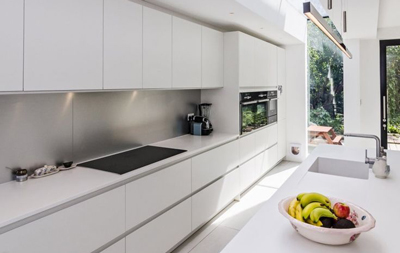 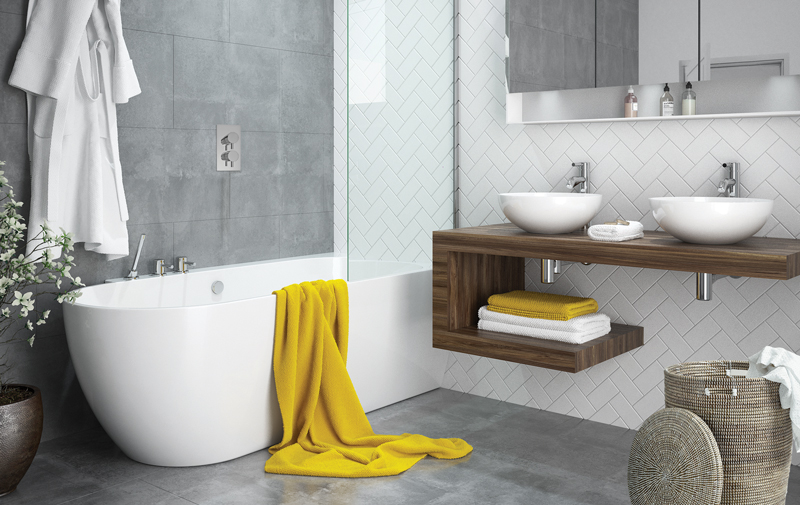 Budget-busters: kitchens and sanitaryware may be upgraded later, so don’t get carried away specifying luxury items. The budget is best spent on quality building materials and skilled labour.

Work from the top of the list differentiating between needs and wants, as far down as you can afford to go. Many selfbuilders forget about hidden costs in their enthusiasm to get building. Remember to allow for solicitor and estate agent fees when selling your existing house, as well as moving costs and/or storage for furniture.

If your build takes longer than anticipated, then the added expense of accommodation can start eating into your funds. If this would create a problem then you should insist on an appropriate penalty clause with the builder if they overrun the expected completion date, and remember to allow for a deposit on rented accommodation.

Most builders’ merchants will offer a discounted price for bulk orders. Open accounts with at least two so that you can compare prices and ensure prompt deliveries. Playing one off against another is usually more effective than hoping your loyalty to one company will be repaid, and the credit available will prove useful to cash flow.

Receipts and invoices from VAT-registered suppliers will show a VAT registration number. You will you need these in order to reclaim the VAT from HM Revenue and Customs for a new build or conversion. Recording invoices and receipts will highlight exactly how well you are sticking to your budget – and prove an interesting souvenir once the build is over.

Keep detailed financial records and receipts until the bitter end.

Many selfbuilders start off with good intentions, but then lose track halfway through a project and end up with a shock when the final bills come in. Make time to keep itemised costings and check them religiously - comparing your original budget with actual costs. If the real figures are running ahead of the original ones, it’s time to make some adjustments. 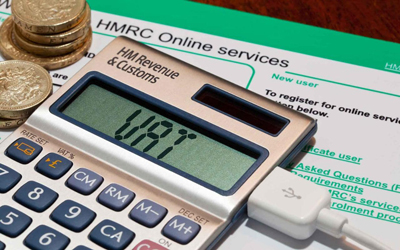 With only one chance to make a claim – within three months of completion - it makes sense to wait until the very end of the build once all your materials have been purchased. Although some selfbuilders do make their claim early to help them finish off interiors, there’s nothing to stop you stockpiling items such as sanitaryware and kitchen units, which you can fit later.

The free estimating services offered by builders’ merchants are a worthwhile method of budgeting: they can take quantities from your house plans and give you a bill of quantities with prices.

Those buying a self-build package or kit should be able to approach the package company for advice; others may ask two or three small builders to quote on the plans. Furnished with information on your site and the sort of finish you require, they will provide a general guide price for tackling the entire build.

If you require more detailed help with your finances then a quantity surveyor may be involved from the start to obtain quotes, prepare schedules and advise on the most economical design and materials. A QS should be able to save their fee by obtaining the best tenders, avoiding over-ordering and keeping a tight rein on your spending using a detailed bill of quantities.

If you prefer to tackle this yourself then various books and software exist to help you, such as EstimatorXpress (hbxl.co.uk), which estimates the cost of your build, includes guide prices and produces reports on cash flow and overall job costs. EstimatorXpress has hundreds of thoroughly tested in-built estimating calculators and is designed with the computer novice in mind. There are also online cost estimating services aimed specifically at the self-builder such as Cost My Self Build, which can help not only with new builds, but extensions and lofts too.