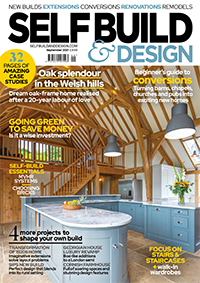 Through a glass darkly

How easy is buying the right window?

I should add that - for excellent financial reasons - none of these, especially the latter, actually happened. But the long postponed project is about to, mainly because it’s one of the cheapest and easiest of renovation projects. I’m talking, of course, about an integral garage conversion.

One external wall is already well insulated. Structurally, all that’s required is for the floor to be raised and insulated and the garage doors replaced by a section of wall and a window consisting of four panels - matching the first-floor windows above.

When I last bought windows, over two decades ago, the choice was simple: white uPVC double-glazing from a major manufacturer.

Simples. Only it isn’t. Especially the windows. When I last bought windows, over two decades ago, the choice was simple: white uPVC double-glazing from a major manufacturer, largely because the salesman was my father-in-law and he generously matched his quote to my budget.

But today my needs are more specific. I’d like triple glazing because the window will be north-facing and elevated. I’d also like good soundproofing because dogs will sleep in the new room and they react noisily to fellow canines passing outside.

So I found myself asking a set of questions, which I repeat below. Hopefully you may find the answers useful in your own project.

Is triple glazing worth the extra expense?

The rate of heat loss through a window, or any part of a building, is measured in U-values, the lower the value the more effective the insulation. A typical double-glazed window, for example, might have a U-value of 1.6, which is the current maximum required by Building Regulations. But triple glazing (pictured) can achieve 0.8 or even lower.

As a result, your energy bills will fall, but the saving is very unlikely to cover the 20 or so per cent extra you will pay for the windows.

There may also be a loss in free energy from the sun, known as solar gain, especially in winter. Solar gain through a double-glazed window is around 62 per cent. With triple glazing, it drops to around 50 per cent. At the same time slightly less light will enter.

If your house has a sheltered south-facing aspect, with a large amount of glazing, double glazing can provide good insulation alongside the maximum amount of daylight and significant solar gain. It will also be cheaper than triple glazing and easier to install because of its lighter weight.

For a north- or near-north-facing aspect, especially in a room where maximum daylight is unnecessary, triple glazing makes good sense. As it does for every window if you are building an ultra-energy-efficient house on Passivhaus principles - the world’s best known form of low-energy construction.

But for a less rigorous build or renovation the main benefit is increased comfort. In a home heated to 21C the internal pane of a double-glazed window will reach between 11 and 16C, a temperature difference you will feel anywhere close to the window and in draughts further away. With triple glazing the inner pane will be around 18C, making the room feel warmer and draught free.

But what about sound insulation?

Compared to a standard double-glazed window, triple glazing can reduce sound penetration by between five and ten decibels. Ten decibels amounts to a 50 per cent reduction. But care needs to be taken over the thickness of the glass. Three equally thick panes can vibrate at the same rate, actually magnifying the sound passing through them.

The answer is to vary the thickness, combining, for example, two panes of 4mm glass with one of 6mm. Making one pane laminated glass, which includes a layer of perspex, adds a further sound-absorbing barrier, as well as good security. Examples are Pilkington’s Optiphon and Saint-Gobain’s Planitherm.

Another significant factor is the spacing between the panes. Typically, this is between 16mm and 18mm. But the most effective distance for sound reduction is from 100mm to 150mm which, for practical purposes, means secondary glazing. This involves installing a separate pane and frame inside the window reveal. Manufacturers claim up to 50dB reduction in external sound.

If you’re renovating a property which already has double glazing or is either listed or in a Conservation Area, so the external appearance can’t change, secondary glazing can also provide good thermal insulation.

How do you judge the quality of a window?

Its energy efficiency is indicated by a Window Energy Rating (WER). This takes into account the U-values of the glazing and frame, the solar gain provided and the airtightness of the seals. The highest rating is A++; C is currently the lowest acceptable under Building Regulations.

But Diane Hubbard of energy efficiency consultancy Green Footsteps also suggests checking that the glass has a low-emissivity coating - designed to reduce heat loss - and low conductivity spacers between the panes, as well as insulating gases such as argon or krypton filling the gaps.

The frame should also have a ‘thermal break’ – insulation between the exterior and interior so the heat can’t leak through it. This is particularly important for steel and aluminium windows. “The frame is actually the poorest performing element of the unit,” says Diane. So the bigger the area of glazing compared to the frame the more energy efficient the window will be.

Who should fit your windows?

The manufacturer, advises Diane. “It’s so much easier in terms of defects. Otherwise installer or manufacturer can blame each other. And get confirmation of how the windows will be fixed and made airtight,” she adds. “Make sure it’s in writing.”