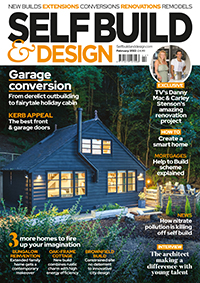 The new demonstration model mixes traditional and contemporary styles, and is the third show home to be built at the site by the Scandinavian house builder. Powered by an air source heat pump, the Mulberry house incorporates the benefits of advanced Swedish technology, using sustainably sourced timber to create an airtight structure.

The traditionally designed mock Tudor-style Oakleigh and the contemporary Adelia – powered by a ground source heat pump – are also available to view.

Visitors to the show centre will get the chance to experience first hand the quality of a Scandia-Hus kit home, as well as discuss projects with one of Scandia-Hus's knowledgeable team members.

There will also be the opportunity to research the products used in the builds, such as windows, doors, kitchens, underfloor heating and the luxury spiral wine cellar featured in the open-plan kitchen/dining space. One-to-one consultations with experienced project managers will also be available to discuss individual self-build requirements in more detail.

An open day, to be held on March 19, 2022, will feature various seminars throughout the day. More details will soon be available online. Visits can be booked by appointment before that date.

The Government must address barriers to building much needed new homes, with too many people currently living in expensive, unsuitable, and poor-quality homes. This is one of the findings of a new report, Meeting Housing Demand, published by The House of Lords Built Environment Committee.

Key points in the report include:

The chair of the committee, Baroness Neville-Rolfe, said: “The Government’s ambitious target of 300,000 new homes per year will only be met if it takes action to remove the barriers for housebuilders, particularly for SMEs who 35 years ago built 39 per cemt of new homes but now build just 10 per cent.

“Skills shortages in the construction, design and planning sectors must be addressed to unlock the required development, including the green skills needed to address climate change.

“Uncertainty and the absence of a clear policy direction has only exacerbated housing problems. Our report provides a package of proposals to help deliver much needed housing and address the critical undersupply of new homes,” Baroness Neville-Rolfe said.

The government has announced changes to Building Regulations designed to cut carbon emissions on new builds by 30 per cent.

The tighter Regs will come into force in June 2022, with a transition period to allow for planning applications that are in progress at the time.

Junior housing minister Eddie Hughes said the change would pave the way for the Future Homes and Buildings Standard in 2025 and would mean all future homes would be net zero-ready and would not need retrofitting.

“The changes will significantly improve the energy efficiency of the buildings where we live, work and spend our free time and are an important step on our country’s journey towards a cleaner, greener built environment,” he said.

The announcements were set out in the Department for Levelling-Up, Housing and Communities (DLUHC)’s response to a public consultation, which ran from January to April on the Future Buildings Standard. It details interim uplifts to Parts L and F of the Building Regulations and the introduction of Part O which addresses overheating.

While welcoming the changes, RIBA president Simon Allford warned that regulations must continue to tighten to hit the RIBA 2030 standard.

The new Building Regulations will come into effect from June 15, 2022.

The DLUHC said transitional arrangements for the next six months will mean that if a building notice, initial notice or full plans for building work are submitted to a local authority before June 15, 2022 then, provided the building work commences by June 15, 2023, work on that building will be permitted under the previous standards.

The government has released more details about its Help to Build loan equity scheme for selfbuilders, with the release of its prospectus. It follows the announcement  of the new initiative back in the summer.

The new £150m scheme will make funding for those wishing to build their own home more affordable, enabling building plots to be purchased with just a five per cent deposit. The government will top up deposits with a 20 per cent equity loan, interest free for five years, with the remaining 75 per cent cost of the build funded by a self-build mortgage.

The equity loan must be repaid at the end of the term (normally 25 years), when the house is sold, the mortgage paid off or any time before. The amount repayable at redemption is linked to the value of the home at the time, and not the amount originally borrowed.

The scheme is open to those that meet the eligibility criteria set by approved self-build lenders, not just first-time buyers.

National Custom and Self Build Association CEO Andrew Baddeley-Chappell said: “This scheme will lead to more affordable and better homes that are more wanted and more sustainable.”

Karen Curtin, MD at Graven Hill, the UK’s biggest custom and self-build development, based in Bicester, said: “Our European neighbours have promoted this option for many years, creating communities packed full of personality, and hopefully this is the start of the UK achieving the same. With self-building becoming more affordable, we hope that more people will feel able to purchase their own self-build plot.”

Applications for the scheme are expected to open this winter.

The data reflects a forestalling in transactions in the summer due to stamp duty concessions, which returned to the normal rate on September 30.

New homes in England will be required by law to install electric vehicle charging points from next year. The move comes as the UK aims to switch to electric cars, with new petrol and diesel cars sales banned from 2030.

Announcing the new laws at the Confederation of British Industry's conference, Prime Minister Boris Johnson said: "This is a pivotal moment – we cannot go on as we are. We have to adapt our economy to the green industrial revolution.”

The National Federation of Builders has raised concerns about the proposed legislation, saying that house builders would need to fund substations in order for electricity suppliers to provide sufficient load to power the chargers.

“These costs are considerable – upwards of £50,000 for a handful of homes - and it is neither the builder, nor homeowner who profits from this infrastructure, it is the electricity companies who achieve revenue in perpetuity from someone else’s investment,” said NFB chief executive Richard Beresford.

There is also the concern that the type of charger being installed will not meet future grid or EV charging standards. The NFB has been calling on the Government to standardise EV charging infrastructure and grid strategy before mandating a solution which will require mass retrofitting.

Rico Wojtulewicz, head of housing at the House Builders Association (HBA), the housebuilding arm of the NFB, said: “The Government needs to think very carefully about how it achieves a green revolution. It must require electricity companies to shoulder this cost, as they will be profiting from these investments in perpetuity. Or perhaps it is time to bring services into public ownership because the government is not proving able to regulate the sector in a way that doesn’t cost the taxpayer.”