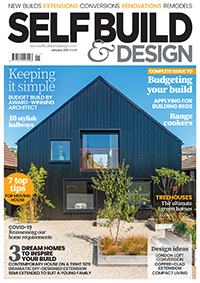 Can modular building bring self build to all?

About five miles south of the City of London, on a steeply sloping wooded site opposite a large hilltop park, is a piece of self-build history. It’s a winding cul-de-sac, accommodating, among the trees, 13 detached houses, dating from 1984 to 1987 – all of them self-built.

Walter’s Way is named after the architect who designed these distinctive homes. Berlin-born Walter Segal arrived in Britain in 1933. He was interested in modernist design and timber frame, though, to his frustration, he spent most of his career designing conventional buildings. But the building that makes him memorable was, effectively, a garden shed.

Okay, slight exaggeration: ‘expanded granny annexe’ is more accurate, since it ended up accommodating Walter, his son, his second wife and her four children. It happened like this.

When Walter remarried after the death of his first wife, both parents owned homes, neither of which met their combined needs. So, in the early 1960s, Walter decided to demolish his new partner’s home and build a new house on the site, funding it from the sale of his own property. The only problem was finding somewhere for everyone to live during construction.

Walter’s solution was to design a temporary home, to be built on the same site as quickly and cheaply as possible. It came to be known as the Little House in the Garden. It took two weeks to construct and cost £800 (about £16,000 in today’s terms).

The design was a post and beam timber frame, making the internal walls non-load-bearing. This meant they could be rearranged with relative ease, while external doors and windows could be sited anywhere.

No need for wet trades

The foundations were 600mm square concrete pads, set three to four metres apart, on which the building’s supporting posts simply rested. This left the ground largely undisturbed. No need for vast amounts of cement, or costly earth-moving equipment. Each pad hole was dug by hand. A flat roof was weather proofed with layers of roofing felt held in place by pebbles.

But Walter’s key innovation was to design the building on a grid pattern of 600mm squares. As this was a standard width for sheet materials, the need for cutting – and the ability to do it accurately – was minimised. The external walls consisted of two sheets 50mm apart, the external sheet weather-proof fibrous cement, the internal plasterboard. Insulation and services went in the cavity. Like the supporting frame, everything was bolted or screwed in place, eliminating the need for wet trades.

Ironically the House in the Garden wasn’t a self build – Walter, then in his mid-50s, hired a gang of carpenters. But he believed his method would be ideal for self-build groups.

It wasn’t until 1974, however, that he was invited to co-design a self-build community scheme in Lewisham in south London. In 1979 work began on 14 Segaltype properties on four local sites. The selfbuilders were Lewisham Council tenants or on the housing waiting list and had minimal or zero building experience. But the success of the project greenlit the Walter’s Way scheme in 1984.

Walter’s designs were for identical two-storey houses, leaving the selfbuilders to choose their own internal layouts. They could have two, three or four bedrooms, separate or combined kitchens and dining areas. They could also extend their properties by up to 10 per cent of the floor area without further planning permission.

When I visited the cul-de-sac last September the houses, though still clearly Segal designs, were entirely individual. One had acquired a balcony on each storey linked by outside stairs, another a two-storey conservatory, a third had incorporated a neighbouring tree.

So why am I telling you this now? Well, the Segal method is a modular form of construction, using standardised components. Modular homes are currently in vogue. Since most are prefabricated, either as storey-high walls or complete sections of a house, they promise faster and more accurate builds and avoid many of the problems caused by Covid on traditional building sites.

The government gave modular its blessing in an August white paper and was recently nudged to provide more support in a report co-authored by industry expert Mark Farmer. He argued that large-scale adoption would not only transform traditional housebuilding but lead to much more customisation.

But there’s another view of modular, which is closer to Segal’s vision. Earlier this year, innovative architect Bill Dunster wrote: “If you can build your own kitchen cabinets you can probably build your own tiny house or retrofit your home. The existing construction industry could refocus on providing these empowering ‘kits of parts’ – and facilitate this process with training and demonstration”.

Dunster’s own Zero Bills Home points in this direction. Designed to be affordable, zero carbon and super insulated, it bridges the gap between DIY self build and prefabricated modular. Available as a kit, and aimed at small and community builders, it offers flexibility for differing layouts, storeys and orientation as well as a comprehensive manual for training local labour.

Of course, the Segal method used existing ‘kits of parts’, which are still available, and plenty of selfbuilders have used them to build low-cost, eco-friendly and highly individual homes, often on plots where traditional construction would have been prohibitively expensive.

But imagine a future where modular customisation is common, not just in terms of the kit homes currently available to selfbuilders, but as dwellings designed to be adapted, extended, repaired, even disassembled at a fraction of the cost of a traditionally built home, and possibly on a DIY basis. A happy thought for a Covid Christmas?

Choosing materials A contractor will usually choose for the cheapest, quickest, or most cost effective (for them) materials. Architects may go for cutting-edge products that will help to build their reputation. As a selfbuilder you owe it to yourself to research your house specification carefully. Use the web, specialist books, magazines and self build shows to do your own independent research.

Choosing materials A contractor will usually choose for the cheapest, quickest, or most cost effective (for them) materials. Architects may go for cutting-edge products that will help to build their reputation. As a selfbuilder you owe it to yourself to research your house specification carefully. Use the web, specialist books, magazines and self build shows to do your own independent research.